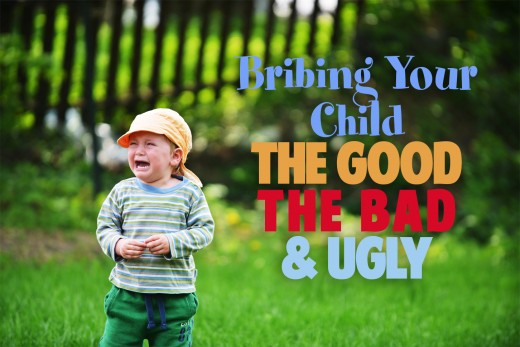 Posted on June 7, 2019March 4, 2020
It’s a well-accepted principle of that bribing children for good behavior is not a constructive parenting technique. The belief is that bribery is used only by desperate parents, and many consider it is to be “bad parenting.” But virtually all parents use it sometimes (maybe in secret), even while publicly agreeing with those who criticise the strategy and who also likely use it in private. After all, sometimes parents just need children to do what they say. The arguments get old, and let’s face it: bribery works. Desperate times call for desperate measures. So why do so many “experts” give the advice to avoid using bribery to get children to comply when nothing else seems to be working?

It’s a common belief that bribes are a bad idea, used only by desperate parents. But used correctly in the form of positive reinforcement, this parenting strategy can help children learn what’s expected of them and become compliant with parental instructions.

Why Do Some Experts Say Bribing Children Is a Bad Idea?

The basic argument against bribing children that many experts as well as parents make is that children should be internally motivated, not externally motivated by rewards. Many parents believe that children should not be given rewards for doing things they should be doing anyway. This includes chores like making their bed, setting the table, putting their dirty clothes in the hamper or cleaning their room.

Emily McMason, a certified parenting coach, explains it this way:

“We want kids to do things because they know it’s the right thing to do and they get satisfaction from conquering something new, or contributing to the family, group or class.”

McMason says that while we think that rewarding children’s behavior will make it more likely they will continue to engage in the desired activity, it actually has the opposite effect. She believes that we are teaching children the worth of something such that if they don’t receive the reward in the future they won’t engage in the behavior.

So if we offer a child a scoop of ice cream for reading 100 pages in a book, they will read exactly 100 pages just to get the reward and stop there. They will then resist reading in the future unless they are offered the reward they have come to expect. McMason goes on to say that some children won’t be interested in ice cream or whatever the reward is so they won’t read at all.